Solar for Temporary Lighting and Power

In development projects, temporary area lighting is a great way to illuminate an area where the location of the lights may change down the line. The lights installed in these areas can be electrical; however, solar is becoming a more promising way of completing projects. Solar allows the lights to be easily moved around as things are developed and eventually placed in their final home once the area is fully completed. This type of temporary installation may need to have some alterations to a standard solar lighting system; however, the system’s final design can be very similar.

Why a Temporary Option

Using solar as a temporary option allows for the lights to be placed in various locations on a site to illuminate a specific area. Parking lots, roadways, walkways, or even general area lighting setups can all benefit from using a solar option. These lights tend to operate the same as the permanent lights that will eventually be installed and allow for the same or similar lighting levels.

A temporary solution is typically requested due to unforeseen changes to the design parameters of a project, for temporary projects, or general construction sites. These lights should have the same design parameters and backup to ensure proper system sizing and operation. These lights also can cost a lot less than some of their counterparts, such as diesel generator lights; however, they are not a good alternative for event lighting used only a few times a year.

Maybe your project needs to have minimum illumination levels during the construction phase; however, a higher light level is required afterward.

Or additional security is needed on a site perimeter but not required after the project is completed.

Or maybe, along with lighting, power for security cameras is required to keep people and equipment safe and secure.

A temporary solar lighting and power solution would be a perfect solution in all three of these instances. Once the project is complete, the lights can either be permanently installed on the site developed or moved to a new location, and the process can begin again. Just because the job is over doesn’t mean the life of the system is over. As long as the system is installed in the same general geographic location, the lights should work the same as they previously did.

Let’s go over a couple of examples:

The City of Coral Springs has used our solar roadway lights during the implementation of neighborhoods in some areas across the city. Instead of leaving everyone in the dark during the construction phase, they installed temporary solar street lights on the neighborhood roadways. These lights keep the new buildings safe from vandalism while also protecting the people currently living in the area.

Once the neighborhood was completed, and traditional lights were installed, the solar lights were moved to a new location to provide security to an access roadway between a neighborhood and school. This ensured that the lights could live out their lives and keep on shining. 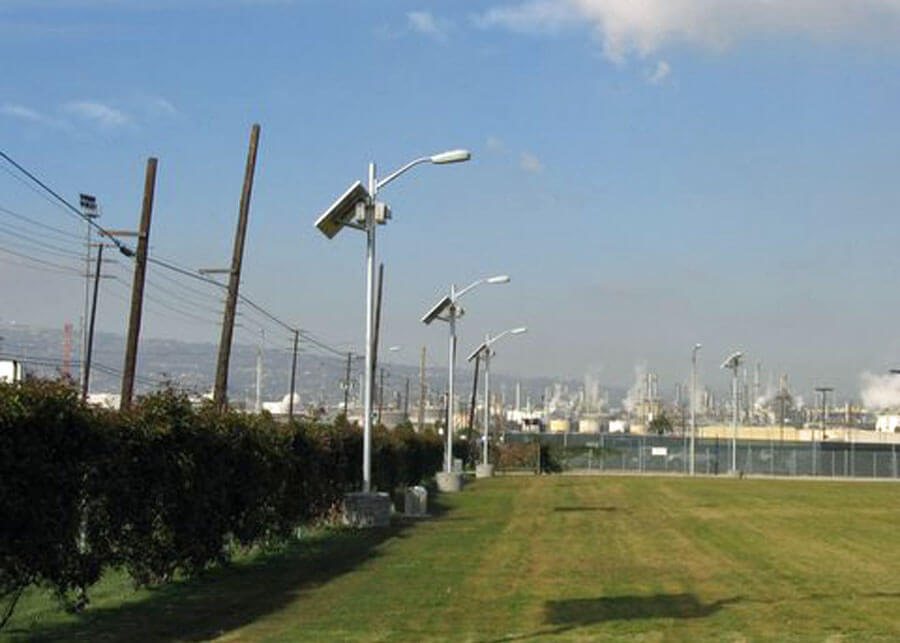 The Port of Los Angeles used our solar lights on the perimeter of a cruise ship terminal boarding area during the development of the terminal. These lights provided security for both the cruise ship personnel and travelers getting ready to depart. In addition, these lights operated all night, so no matter the time people came and went, the lights were operational.

The lights have since been moved to illuminate a walkway in the nearby area. Having a 25+ year lifespan, these lights can serve a purpose long after the temporary project is completed.

The Newport Mining Facility needed solar lights that could easily be moved from one location to another as things changed in the mine. They purchased several solar lighting systems, complete with a pole, and constructed the bases of old tires. These lights were easily moved around the facility using forklifts and other heavy equipment. These lights will probably never have a permanent home at this facility but will easily perform no matter where they go at this facility.

Poles and Their Designs

Designing a pole to be moved around would require auger base poles or prefab concrete bases for anchor base poles. When having a prefabricated base that can easily hold up the pole with the solar panel, the poles can then be picked up and moved from one location to the next. Like with Newport Mining, they built their bases in large tires to provide a green option for lighting and recycle the old tires into something new.

So next time you have a project that may require some temporary lighting, think of using a solar lighting option as a great alternative. These lights can be moved around a geographical location, allowing for the same lighting from one place to the next. You can even permanently install the lights at the end of a project to showcase the area’s green initiatives.

Fighting for Solar – Know Your Rights

Solar Business Security: Pros and Cons to Know Before Buying