The installation of solar LED lighting is a major portion of a current Martin County project to resurface the road and improve the utilities around Airport Road in Stuart, FL.  Stuart based contractor Sunshine Land Design substantially completed the $1.6 million project, funded by grants from the Economic Development Administration and Florida Department of Transportation, on March 30.

The county chose to install solar LED lighting instead of conventionally powered sodium vapor or metal halide light sources. The 27 solar lighting systems were provided by Stuart based manufacturer Solar Electric Power Company (SEPCO).   According to Martin County Project Manager Paul Bangs, the county chose to use the solar lights in order “to do something innovative” and “likes that they are energy efficient.”

The lights will save Martin County both short and long-term costs.  Besides eliminating future electrical utility expenditures, the solar lights do not require the additional installation expense of trenching wires to run power to each light pole.  Bangs stated, “You don’t have to run permanent power to the solar lights” which sometimes “can be a pain in the neck.”  Project Manager for Sunshine Land Design Mike Dexter added, “The lights are easy to assemble and install.”

Bangs also stated that he is “very happy with the LED lighting”, referring to the technology used in the light fixtures.  LED’s, short for light emitting diodes, provide a whiter and more efficient light source when compared with other lamp technologies, enabling lower wattage fixtures to be used while providing the same or better performance.  Airport Manager George Stokus echoes these sentiments stating, the LED lights provide “better lighting quality than the sodium vapor lights on the power poles” and “add appeal to the road.” 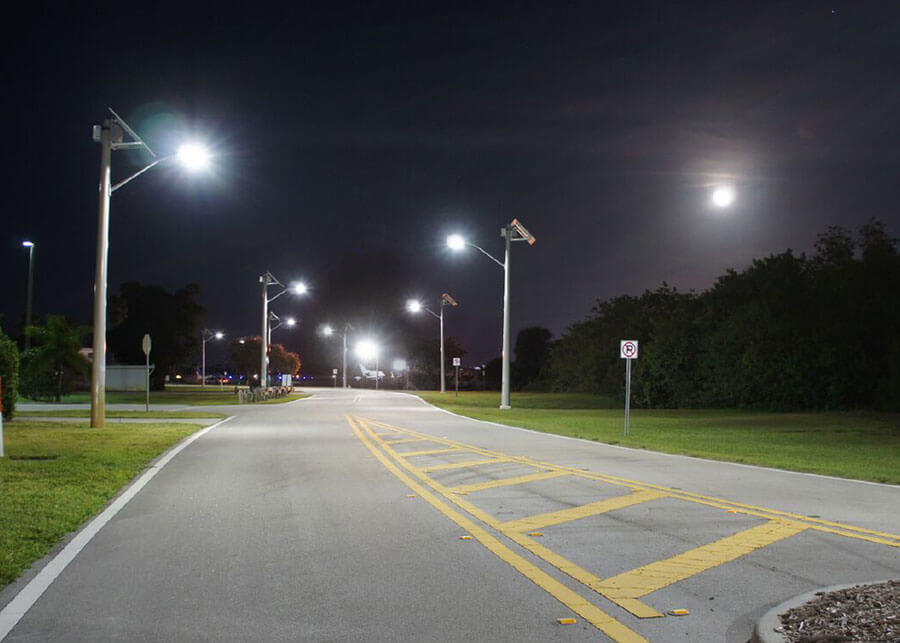 According to SEPCO Project Manager Matt Cirrito, “Although SEPCO is an international manufacturing company, we have a large presence in Martin County and throughout the local area.  SEPCO has provided equipment for numerous installations of solar sign, roadway, and park lighting in Martin, St. Lucie, and Palm Beach counties.”

Cirrito adds, “We are very happy to have this installation of our product in our backyard.  As more counties and municipalities are made aware of the benefits and performance of solar lighting, projects such as this will start appearing more and more frequently.”

Solar Lighting Out of the Shadows at LightFair International